Also for the record, I have mixed feelings about this car. “Mixed” I say feigning some semblance of fairness. As an unabashed Lotus enthusiast, I am biased. Meaning extremely ambivalent about this “record.” Imagine being British, or having been involved with Lotus Cars Ltd. and seeing this. You’d simply think, “Wanker”.

As ambivalence might merit an attempt to reconcile the conflicting pros and cons, first the pros:

Americans who travel much, and maybe not very much, are likely to be familiar with the feeling of some occasional embarrassment from national identity. It can come when we begin to discover our own ignorance of other peoples and cultures, or if present to any of us acting garishly or without manors when in other’s country/culture. And sometimes it can come from our politics and poor international relations. Sometimes it has four wheels. This is one of those times.

It is not without some nationality-embarrassment that I regard the Hennessey Venom. Hennessey took a small European car, designed very specifically to optimize cornering speed, and turned it in to dragster. How ironic. Yet I hear no irony in any reporting of it. This lack of a sense of irony… well, you get the idea.

I almost said, leave it to a Texan. But in a way, we can’t blame them. After all, their roads are almost all straight.

One of the most influential movies in my life is American Graffiti. One of George Lucas’s cinematographic masterpieces. It is based on his place of origin, Modesto. Where the roads are also very long and very straight. The turns are 90 percent 90 degrees. I’ve recently become very familiar with the California Central Valley. I love the on-going spirit of hot rodding there. And I grew up going to Fremont Drag races and reading Hot Rod magazine. I love our uniquely American contribution to autosports. But the “Venom” is a Lotus. Straight 4 or V8, it is a Lotus chassis. I am putting a Honda in my Elise. I’m not going to name it after myself. By claiming something that is not his own, Hennessey is merely exhibiting typical American exceptionalism. It’s embarrassing.

However, there is one other way to look at Hennessey’s Venom. A third way. The Shelby Cobra way. The Cobra is based on the Bristol AC. A classically British chassis. Shelby added American muscle to it. But, even here, there is a significant difference. One of business conduct. Shelby contracted with Bristol. As had Tesla and Lotus. In both cases, it was business arrangement between the companies from the outset. There is no evidence or indication of any similar sort of arrangement between Hennessey and Lotus. Hennessey has usurped and adapted the chassis to create yet another Lotus-derivative car. It is not a unique creation, legally, or as an automotive design. And it isn’t mass-produced. So is it a even “production car”?

Hennessey, like Shelby, designed neither the engine nor the chassis. Fabrication + tuning = “production” brand? There’s more than one envelope being pushed by the “Venom.” It is one of English usage. Or at least a loophole in it, from lack of governance. Mariam-Webster has no entry for “product car”. Google refers us to wikipedia’s entry, an unreliable source. The FIA defines Production Vehicle as one producing “at least 25 identical cars produced within a 12 month period and which were meant for normal sale to the individual purchasers.”
Hennessey’s own site says, “Hennessey builds just five Venom GTs per year.” So there you have it: it isn’t a production car by FIA standards.

Also, the Cobra can turn. I’m liking it more all the time.

I would accept “Hennessey LS2 Exige”. Or any brand name with Lotus and Chevrolet in it. That, my dear reader, is as fair as I care to be about Hennessey and his Hubris, I mean, “Venom.”

Enginetiks a.k.a. Engtuning has closed its doors for business. The Lotus Honda swap project is moved to an undisclosed location for completion. 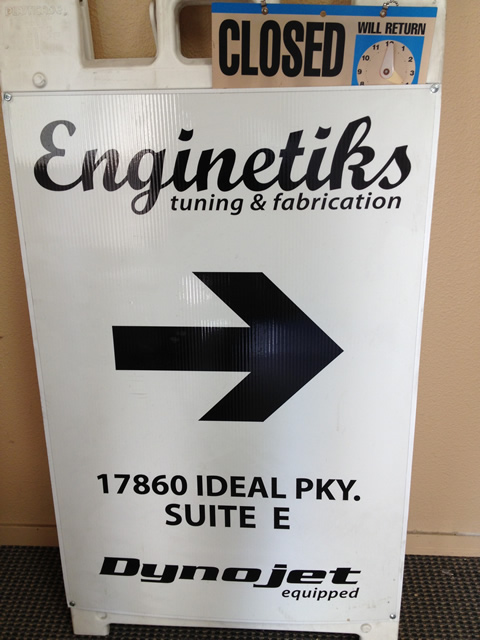 And yet… endings large and small, for all of their time-bending melancholy, or at least pause, so long as we can feel it at all, hold out something else for us: change. Something new!

And we may as well admit it, too, every venture requires at least one of both; a beginning, and an end.

“Speed has never killed anyone. Suddenly becoming stationary, that’s what gets you.”
—Jeremy Clarkson

Is the Alpha Romeo 4C an Italian Elise? Imitation, they say, is the highest form of flattery. Watch: