I’m going to do something unpredicted. By me. Maybe by you. I’m going to talk about a non-Lotus. Sort of.

This car is sort of a Lotus. That will not resonate with many. Too few know that the car I am going to talk about is “sort of a Lotus.” But it is. If you know Lotus’, you know the Elan. And by simply knowing I’m not talking about it, or Lotus, you may already suspect… I am talking about the MX-5, the Miata.

The Honda Elise project, a joy to imagine, has been undrivable. Resurrection can not be forced and it is not miraculous. It is work. There are steps. Patient, sometimes tedious tests, requiring tenacity and focus. Urgency, yet patience. All of which only agitated my drive to drive.

I thought long and carefully, not hard, about what I can drive that will scratch the itch that Lotus infected me with. And finally I abandon reluctance for the opportunity I found through patient archeology of the list Craig started. It wasn’t love at first sight. Neither was the Elise. But it was “yes” at first question.

Though my first love, at this point the K20 Elise has also become like a wife. Perhaps even trophy wife, monetarily at least. The question of what to drive, then, that is affordable, is similar to the question, “can I be your mistress”? A perk of loving cars is that you need not love only one. And so often (not always), the answer is Miata.

Like the Lotus, the Miata is small, low, awkward to enter/exit, and has four cylinders. There are more differences than similarities, though. And though expressed differently, both the Lotus Elise and Mazda Elan, I mean Miata, were sprouted in the same design philosophy greenhouse. “We wanted to capture the spirit of the British sports cars” says the Miata’s designer, Tom Matano. (Can’t expect him to say ‘yes, we copied the Elan.’). Both can infect you with “Lotusitis”.

When I first got Lotusitis I thought, naturally, only Lotus could fix it. I knew other cars could convey similar experience-derived elation. But I had Lotusitis. I was intoxicated. Blind. Love does that.

So while the Elise is the love of my life, being undrivable for a time, in the mean time I’ve settled for her cousin. If Honda Elise is Ginger, the Mazda Elan is Mary Ann.

What I love—what you and every one loves, knowingly or not—about a Miata, is its Lotusness. Its scale, agility, eagerness… it’s joy for existence, that originates with the British open two seater.

But there is one difference that would be shameful to ignore. It’s what the Miata taught me. To wit: Humility. And I am grateful for it.

The Miata is remarkable, and not because it is exotic, but because it is the opposite of exotic. It is nearly ignorable, except for the stubborn contradiction it is to every other car, which has been super-sized. Even the Mini, another Brit ex-pat (BMW), is an oxymoron. The VW bug democratized transportation. Honda democratized the motorcycle in the U.S. And the Miata/MX-5 democratized the joy of driving. It is as populist in its attitude as a car can get.

And if you’re already cycling though your list of, and this is the key; small, light, affordable, accessible, non-muscle-rod convertibles (Ghia, Sprite, Spider, S2000, 7, and so on), forget it. None of those, not one, can be found in mass, at most any track, most any weekend. Spec Miata is the most popular racing class (for drivers) ever. None of the other “sportsters” are to be found parked at a hair salon and driven on a track on any given Sunday. None.

The humility that a Miata owner owns isn’t humiliating. More, humbling. Good humble. Forget exotic cheese, kale, and quinoa. Eat your spinach, bread crust, and drink tap water as we should, humble. Old-school making the most of it humble. “What you see is what you get. No false pretense at all”, Matano says. And it is this honesty, through lack of pretense that is rife in the rest of the contemporary auto world, that I’ve learned to appreciate, and respect.

The Miata is not “famous for being famous.” There is nothing rare or precious about it. Yet popularity itself has no value to a driver’s driver. Experience, control, and feel do. A Miata is driven for driving. When you see a driver driving a Miata, you know the driver’s intent is for driving, and driving pleasure only. Unlike others in the sports car market, it conveys no prestige to the driver. When you see a driver driving a Miata, rest assured, they drive it for driving enjoyably, not conspicuously. The experience is reserved for the driver only. And in this sense it is more personal, and possibly more intimate.

Make no mistake, there is nothing like driving a Miata to remind you you’re not driving an Elise. Yet the “Mazda Elan” has more Lotusness than all but the Caterham, which shares none of its availability, affordability, maintainability, practicality, or accessibility.

Despite the Miata’s wholesomeness, if sufficiently powered, it is a tear. It can scare. And unlike a Lotus, or any even mildly exotic car, replacement parts can be had cheaply and easily. It may even be the most practical Lotus derivative/ex-pat.

Yes, it scratches the itch alright. And I don’t worry if the scratcher will break. That deserves respect. I am humbled. Thank you Mr. Matano. Lesson learned. Nothing like a mistress to remind you your faults.

Mr. Matano, it is worth mentioning, lives in San Francisco. The Miata was designed in California. For those of us who live here, it is one of our own.

Here is the one I drive. 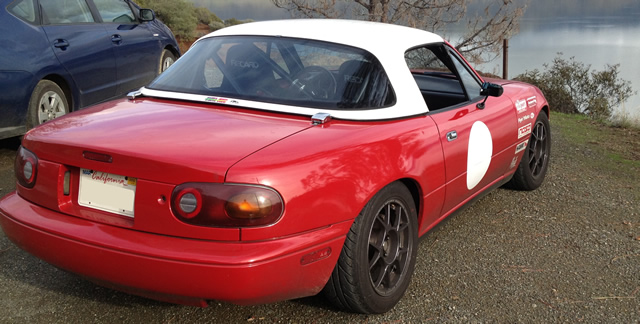 Warning: count(): Parameter must be an array or an object that implements Countable in /nfs/c01/h05/mnt/5843/domains/k20elise.com/html/wp-includes/class-wp-comment-query.php on line 405